Mr. D’Aloisio is a forensic structural engineering consultant for Forensic & Failure Analysis. He is the managing principal and president of Klepper, Hahn & Hyatt.

Mr. D’Aloisio has over 30 years of experience in projects ranging from the design of mid-rise and high-rise steel and concrete buildings, to rehabilitation projects, and forensic investigations. He is a LEED-Accredited Professional (from the U.S. Green Building Council) and certified by the Structural Engineering Certification Board (SECB).  Mr. D’Aloisio is a member of SEAoNY, ASCE, NSPE, and CEC-NYS. Mr. D’Aloisio is a registered professional engineer in New York State since 1998. 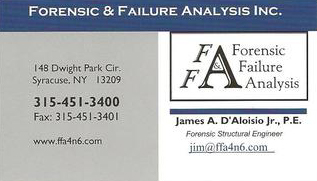 Mr. D’Aloisio’s areas of expertise include:

Mr. D’Aloisio graduated in May 1982 from Rensselaer Polytechnic Institute in Troy, New York, with a Bachelor of Science in Civil Engineering, structural emphasis.

He was first employed as a consulting structural engineer with Lamprecht Consultants / LPJ Inc. in Baltimore, Maryland, in 1982; then with Goldreich, Page & Thropp, P.C. in New York City in 1983; and finally with Weiskopf & Pickworth Consulting Engineers (W&P) from 1983 to 1987.

At W&P, he was involved in the design of mid-rise and high-rise steel and concrete buildings, as well as rehabilitation projects, investigations, and facade rehabilitation.

Mr. D’Aloisio is a member of numerous societies and committees in his field including Past President of the American Society of Civil Engineers Syracuse Section. He has published over twenty articles since 2006, presented nationwide, and testified as an expert in court.