An excerpt and summary of Mr. Phillips’s presentation is below.

A relocatable power tap (RPT) is a fancier term for what we commonly call a “power strip;” it’s a device with a series of receptacle outlets that would connect to an existing building outlet or fixture. An RPT differs from a surge protector in that not all power strips are surge protectors.

The latter has electronics built in that help prevent power surges from damaging connected devices. Connecting a device to a surge protector provides more protection than simply connecting it to a wall outlet.

AC/DC power, electrical arc damage, and a derivation of the mechanism of high resistance failures were discussed.  The anatomy of RPTs with 3D models and were presented.  New and failed dissected failed models were available to seminar attendees.

The Root Cause of Failure

1. Potential difference with unintended electrical activity
2. Resistive heating – heat being generated where it should not be

The former can come as a result of a conductor insulation breakdown due to external damage (mechanical, thermal chemical, sunlight) or due to “arching through char.”  This is a process in which the PVC (or other insulating material) sheath on electrical conductors degrades due to exposure to fire or fire temperatures.  An example of a mechanical failure is rolling chair over the cable of a plugged in strip enough times that it eventually shorts and fails.

The latter can come courtesy of a component of the device’s circuitry being compromised – this can be a loose connection and the screw connection, plug blade, or blade to conductor crimp.

An increased circuit resistance is introduced. Heat is (as previously mentioned) being generated in spots it should be – increasingly the likelihood of failure and potential for a fire. 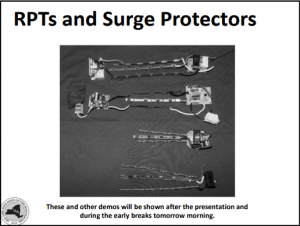 From the FFA Archives – A slide from Mr. Phillips’s presentation, with photo depicting four disassembled RPTs. 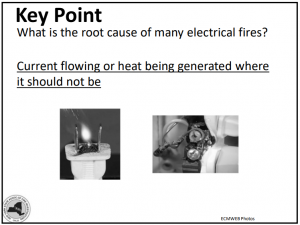 From the FFA Archives – A failure of an RPT can usually be traced to instances of current flowing on an irregular path, or heat being generated where it should not be.

What Exactly Causes a “Power Surge?”

A “power” surge is actually a surge in voltage.

When the electrical current passes through an electrical device and exceeds its operating voltage range, the result is a surge or an “arc” in electricity- and heat – that can compromise and destroy a device’s electrical wiring and components both gradually, or instantaneously if the surge is immense enough.

Pertaining to surges causing a power strip to fail, power strips – like any electric device – are bound by design limitations.  So… when these devices do fail, what’s the primary culprit? 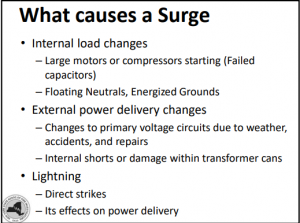 What is a MOV Failure?

In the guts of many surge protectors is an electronic component called a Metal Oxide Varistor (MOV) that shunts or diverts surge current in an effort to protect the devices attached to it.

The more surges diverted as time passes – the more the MOV’s life span shortens… and failure becomes imminent. Mr. Phillips’ presentation compiled a series of “failure” experiments, with the goal of clearer comprehension of MOV failures where surge protection was lost. Mr. Phillips deliniated the case studies and presented these failure modes in his seminar course material. 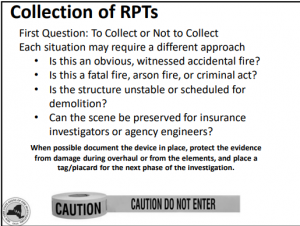 During the scene exam process items of evidentiary value are often collected.  Before disturbing or collection an investigator should ask themselves a few questions.

The presentation material details a variety of failure modes.

These are a few exampled of common failure modes:

MOV failure causing a failure.  Most modern MOV equipped RPTs have thermal fuses to halt the flow of current to the MOV or the entire device.  This was not always the case.

A light hearted video compilation of the MOV tests were compiled for the enjoyment of the crowd.